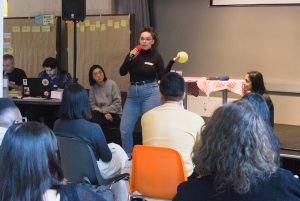 Being surrounded by youth from different colors, ethnicities, cities, countries, origins, educational backgrounds, beliefs, “legal statuses”, and one language that I don’t speak nor do I understand is my best experience in Berlin so far.

Since I arrived in Berlin, three months ago, I have been haunted by feelings of loneliness, alienation, and un-belonging which is something I prepared myself for when I left Egypt, my beloved second home; I even expected it in a much more severe form. How wouldn’t I have these feelings in Germany if I have felt them when I arrived in Egypt which utters my language and speaks my culture! I moved to Egypt six years ago after fleeing Syria, my beloved original home. However, what makes them more intense in Germany is that I am totally alone here while in Egypt I had a family, and a way of communication, simply an Arabic tongue… until the day when I went to this event called BarCamp as part of my internship in Rosa Luxemburg Stiftung. 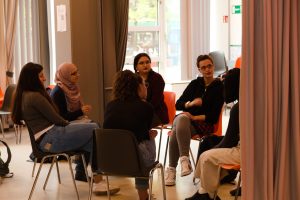 Before the event, I chose to be part of the documentation team which consists of me and another Syrian, as simple as that. I believed that this would help me avoid unnecessary feelings of isolation out of the communication barriers I mentioned earlier, and more importantly, out of the different perspectives we have about the topic of migration, which ironically speaking, the topic that made me join the Migration Dossier which runs the Young Migrants Blog project, in the first place. In short, although learning about migration in Berlin-Germany, as part of my masters’ degree at the Center of Migration and Refugee Studies at the American University in Cairo and in an early stage of my thesis writing, I gave up on earning knowledge on that day and made myself satisfied with only documenting the event and I consolidated myself that maybe one day I will be able to see the full event’s documentation and understand it! 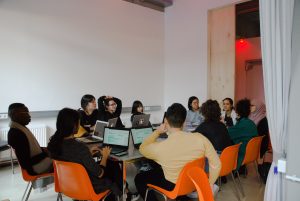 The magic started to happen when I began interviewing the participants, who were migrants or sons and daughters of migrants who originally came from different spots of the world, and who also came from different cities around Germany to be part of the Migrant Blog BarCamp. They were around 18 people, young, sharp, active just like how I thought they would be, despite the fact that they were more open and much more friendlier. I felt that an invisible bond was being initiated, which connected me with each and every single individual. They spoke English with me, which all I needed to document their thoughts about the event, and to know parts and parcels of their personalities, interests, and what made them come all the way to attend this event, in particular. However, in spite of having no least clue about what is taking place in the sessions and the panel discussions which were taking place in my background and which seemed quite lively and rich from a distance, I had the feeling that I had the most of it!

„I felt I am between family and friends, even though temporarily. It was a very empowering feeling to have“

I was connected by heart and soul to those people. And although I did not understand much of what they were talking about that day long, I felt I am between family and friends, even though temporarily. It was a very empowering feeling to have.  I felt that I did understand what matters more than words, the ultimate meaning of solidarity. It felt like everyone in that room was the best version of him/herself including myself. Their energy was much more powerful than the language they speak. Their power and passion about their beliefs, which we shared most of, could easily reach my soul and was needless to enter my mind first. 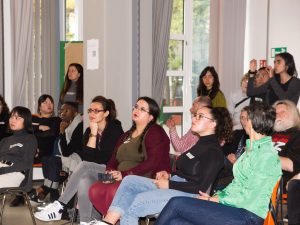 I recognized that humans have much more to belong to each other than what they think. Because we all had the same dream of having a community free of racism, we were connected by the power of the shared cause. I wrote this reflection to say that we have all the power we need to fight racism… the power of solidarity.